2015 is another Pink Salmon year for the Pacific Northwest, and the Skagit River is again due it’s fair share of humpy fever. As the fish move upstream, they will color up fast and start to grow the signature humped backs that give them their nickname “humpies”. If you’re looking for table fare, stick to the lower sections of the river. A popular technique for Skagit river humpies is plunking with sandshrimp.

Not only are Pink salmon on the fishing menu, but there will be a Sockeye fishery in the Skagit river as well running June 16 through July 15 with a daily limit of two Sockeye.  The Skagit is open in the lower river from Hwy. 536 at Mt. Vernon (Memorial Hwy. Bridge) to mouth of Gilligan Creek with a daily limit of 3 sockeye.

Additionally, the Baker Lake sockeye fishery is anticipated to open July 10. Find more info on that at the WDFW Baker Sockeye page located at: http://wdfw.wa.gov/fishing/salmon/sockeye/baker_river.html.

The rest of salmon season opens September 1st with other sections following at later dates. Emergency rules may be in effect and rules and regulations can change at any time. Be sure to check the WDFW regulations for the specific section you plan to fish. Check out the map below for fishing access areas. 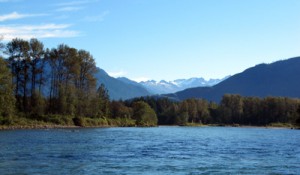 The Skagit River is a large river that flows through Skagit County and can provide some excellent salmon fishing opportunities. The Skagit river splits near the mouth and subsequently has two mouths. One mouth is just south of La Conner and the other is a few miles south. From there the Skagit flows upriver through Mt. Vernon, past Burlington, Sedro Woolley, Concrete, Rockport and up further as it follows Highway 20 into the mountains.

Trophy sized King Salmon and Steelhead are present but can be few and far between. On odd numbered years large runs of the small sized Pink, or Humpy, salmon make their way up the river starting in mid August. Popular methods for fishing the Skagit river include plunking with bait, plunking with plugs and spoons from a boat, and casting spoons and spinners. Dick Nites are especially popular for Skagit River salmon.

If you have a boat, there are several launch spots. Otherwise, if you’re confined to the shore there are also multiple access points for bank fishing. Some of the popular access spots follow. See the map below for specific locations.

2013 is a Pink salmon year on the Skagit, with over a million returning fish forecast by the WDFW. This should make for some fast and furious action on the lower river when it opens August 1st.

Sockeye will be available again for sport harvest in Baker Lake this year, but there is not expected to be a Skagit River sockeye opening. Sockeye have been available the past few years and will open on July 10th this year.

Salmon fishing on the Skagit River kicks off early this year with a June 1st opening for King (Chinook) salmon on the Rockport to Marblemount stretch, with a portion of the Cascade river open to hatchery king retention as well. The King season goes June 1st to July 15th with a daily limit of two adult kings and two additional jacks.

Sockeye will be available for sport harvest in the lower Skagit River this year, as well as the opportunity to fish Baker Lake for Sockeye that has been available the past few years. The Sockeye fishery in the Skagit River is only open from Highway 536 at Mt. Vernon, to the mouth of Gilligan Creek and allows a daily limit of three fish. The opening dates are June 16 – July 15th.

The rest of the river opens in some sections September 1st with other sections following at later dates. Emergency rules may be in effect and rules and regulations can change at any time. Be sure to check the WDFW regulations for the specific section you plan to fish.

2011 is another Pink salmon run year, and eager fishermen and women are already anticipating another good run.  Opening early this year, on August 1st, the lower river below Mt. Vernon will be open for salmon with a daily limit of 3 fish plus 1 pink salmon. Chinook and Chum are off limits this year throughout the system (aside from a June 1 – July 15th season on hatchery chinook in the Rockport to Marblemount stretch).  With a solid run of pink salmon expected, as well as a potential sockeye season on the area of the Skagit river near the Baker river, the prospects for 2011 are good.Regardless of whether there is a sockeye salmon season on the Skagit river, there will almost certainly be an opener for Sockeye in Baker Lake. 2010 was a good year for Sockeye, and the lake was opened for the first time in a number of years. Projected good returns mean that a Sockeye salmon season on Baker lake is likely.

After the early opener on the lower river, the rest of the system starts to open up for salmon later in August and September. The hatchery steelhead season usually begins are Thanksgiving and gets into full swing in December.

The Skagit River received a larger than usual run of Sockeye salmon in 2010, which allowed an extended fishery on the Baker River and Skagit for Sockeye Salmon. As a result of this run Baker Lake was also opened for fishing and gave anglers a great chance at catching some bright sockeye salmon.

The Silver Salmon, or coho, run is forecasted to be larger than normal and the daily catch limit has been raised to any 3 coho salmon per day. This fishery opens Wed., Sept 1st below Gilligan Creek. Much of the remainder of the river opens mid month to coho salmon fishing on Sept 16th.

According to the WDFW, the Skagit River will be open for Pink Salmon Fishing from August 6 – 9th from the Mouth of the river to the mouth of Gilligan Creek. Gilligan Creek is just upstream of Sedro Woolley.

The daily limit is 2 salmon and only Pink salmon and Chinook salmon can be kept.  That means any combination of the two but only one Chinook and only a total of two salmon total per day.

Other parts of the Skagit River are open for Chinook fishing currently and Pink salmon fishing will open on August 16.

From the mouth the highway 536 at Gilligan Creek Chinook salmon is open from July 9 – August 9. from Noon on Thursday through Sundays only. Other salmon fishing opens August 16 –  December 31st.

There are special rules in place for retention and areas open on the Skagit River.

Be sure to check the fishing regulations at http://wdfw.wa.gov/fishing/regs_seasons.html to make sure you are fishing legally. There are game wardens who will write tickets.