Specific opening & closing dates: consult the fishing regulations for most up to date information and emergency closures to avoid a ticket.
http://wdfw.wa.gov/fishing/regs_seasons.html

The Nooksack River consists of the North Fork, South Fork, and Middle fork rivers which combine near Deming to create the Main Nooksack river. The main species to fish for are Salmon and Steelhead in the fall and winter. Salmon runs start in September with Pink salmon on odd numbered years and Coho, King and Chum salmon. There are summer and winter Steelhead runs and Searun Cutthroat and Dolly Varden (searun Bull trout) as well.

There are plenty of shore fishing opportunities for the Nooksack river if you’re willing to hike or fish with a lot of other people. Fishing from a drift boat or jet sled is always preferred as you can cover a lot more water that isn’t accessible from shore. Check out the map below for a few public access points for shore fishing.

The Coho and King salmon fishing starts to get good in September in the Ferndale area with the runs moving further up into the Nooksack and Deming areas later in October. The South Fork river can be good for Coho fishing in October through November. You can access a good fishing spot off the Saxon Rd. just past the bridge. Generally, there is a strong run of Chum salmon starting in mid October and running through December in the Main and North fork. The North fork has selective gear rules and has special closures so be sure to check the regulations. 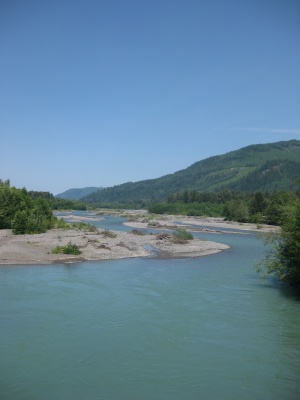 Popular Salmon lures include drift gear with or without bait such as eggs and sandshrimp, marabou & chenille jigs fished under a float or by twitched, spinners such as Blue Fox spinners, spoons, and fly fishing tackle and flies.

As a general rule it seems that the following is true for salmon in the Nooksack River. These recommendations are based off personal experience fishing in the Nooksack river system.

Nooksack River King salmon like a variety of large lures and baits. A few popular colors are red, orange and yellow. Large size 4 and 5 Mepps and Blue Fox spinners work well. Large tear drop spoons in brass, silver, red, and orange or any combination will also produce well. Floating roe (salmon eggs) or drifting and plunking can work as well. For plunking generally large spin-n-glows with a bit of yarn on the hook to help keep the line from cutting through the bait that’s held in the baitholder loop.  Large marabou jigs can work well for Nooksack River Chinook as well.

The Nooksack river gets a decent hatchery Coho, or silver salmon, run. Only fin clipped hatchery fish may be retained. They tend to like smaller lures than the kings.  Popular colors are red, blue, pink, black, green, and chartreuse.  Medium sized spinners like size 3 and 4 Mepps and Blue fox work well in a variety of colors. Nooksack river Coho especially like eggs. Popular methods are drifting a chunk of cured roe under a float, or bouncing the bait along the bottom with drift gear.  Floating and drifting roe works well for Coho as well as regular drift gear without bait, marabou jigs, and flies will produce Nooksack river silver salmon as well. Marabou and schlappen feather jigs worked under a float along current seams and through deep pools work well. Another fast growing technique is the use of jigs that are cast and retrieved in a hopping motion. This is referred to as twitching jigs and can be deadly on coho salmon. Usually used in slow, deep “frog” water, you cast a heavier jig out, let it sink to the bottom and then retrieve in a twitch, reel, twitch, reel, twitch twitch, reel, motion. The up and down action of the marabou feathers drives coho mad and can be deadly.

The Nooksack river generally gets a large run of native Chum salmon in the fall. All Chum salmon are non clipped native fish and can be harvested. Nooksack chum salmon are aggressive biters and hard fighters. Chum salmon especially like lures in chartreuse, purple, and pink. Other colors like red, orange and green will produce as well. Drift gear and jigs work best for Chum salmon but spinners and spoons sometimes are the key. Combining red and chartruese, purple and pink, or purple and black in a marabou jig or in a drift rig with bead, float, and yarn combo are the ticket.

The Nooksack river has been closed most years recently for Pink salmon, but has opened in recent years for the Pink Salmon (also called Humpy salmon) run. This season will differ from the Skagit river, and most others in that it will be a selective gear season and will not allow bait. From the Highway 544 bridge at Everson downstream to the mouth retention of up to 4 pink salmon per day will be allowed. Bait is prohibited, and only one single point hook may be used*(check the regs carefully for daily limits and special regulations).

Nooksack river steelhead are few and far between, but for the determined angler they can be found. The North Fork of the Nooksack river is usually the steelheaders best bet with the hatchery runs returning to the hatchery not far from the mouth of the north fork Nooksack river. January and February are the best months with the hatchery run coming to an end in February. Only fin clipped hatchery fish may be retained. Nooksack steelhead like pink jigs, plastic  pink worms, drift gear with orange, red, pink corkies/cheaters, eggs, shrimp and flies. Spinners and spoons also work well for Steelhead.